Number of the Month

As a contribution to the BBC’s valuable exercise in the art of Phenology, here are two pictures of the same tree. 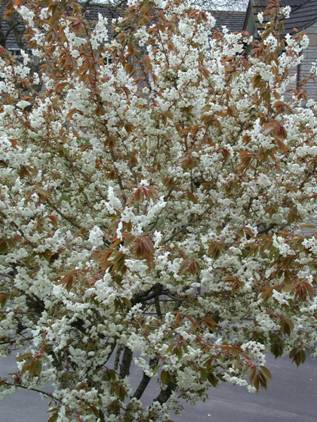 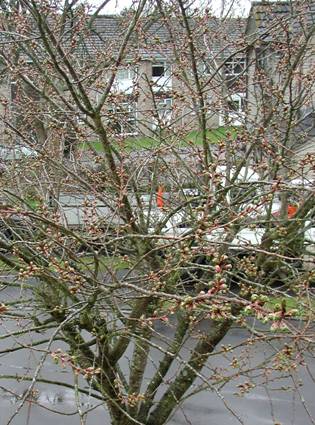 Many thanks to those who enquired, but your bending author is alive and well and living in Dystopia. If you want to know what living in Dystopia is like, here is a small sample. A short break from the internet proved so therapeutic that it expanded, without prior intention, into a longer one. The one thing in favour of banging your head against a brick wall is that it is lovely when it stops.

Meanwhile, for your edification here is someone who has enough patience to deal with the serpentine writhing of the Australian Adhominator. Like Gaul, it is divided into three parts, part one, part two and part three. Thanks to Aaron Oakley for the tip.

Established readers of Number Watch will remember that these outbreaks of dysthymia do not usually last for more than a week or two, but with the David Cameron phenomenon added to the absence of spring and the general state of the nation, who can tell?

Thoughts in an absent spring

Oh to be in England now that April’s there sang the poet, but into the last week this year it had little going for it so far. There was still no blossom on that tree. The early cauliflowers, a variety called Mayflower, which were such a success last year, stood sere and pathetic in the wind, cold and gloom. To crown it all, a blackbird got into the greenhouse and trashed the place, pulling up the seedlings and throwing them about. You feed it all through the drear winter and that’s how it repays you. As the Wayco Kid said with such feeling “Little bastard shot me in the ass!”

In a depressing month the most depressing factor was the whole David Cameron phenomenon. The man raises futility to a fine art. While his party is engaged in a vital local election campaign, he is off on a jaunt to Norway to watch a glacier retreating (and you thought that watching paint dry was the epitome of dull pointlessness). Of course, sceptics know that Norway also has advancing glaciers, but the ordinary punters are not supposed to be told that. All the more remarkable then that the Daily Telegraph published a letter from our Philip, revealing that inconvenient fact. The DT is occasionally becoming quite bold in its transgression of the agreed establishment censorship norms. The man out-Blairs Blair in his puerile green stunts. He cycles to The House, while his clothing and documents follow in a posh chauffeur driven car.

Why is his existence so depressing? It is the fact that your bending author foolishly nursed the private hope that he would see his country return to sanity before he died. The possibility is now somewhat remote. So much for optimism. The ghastly prospect is that the man will become Prime Minister. The ancien régime has an odour of decay about it. The Great Leader’s habit of brushing awkward questions under the carpet was bound to catch up with him. Now there are three ministers in a position that would have resulted in resignation in more honourable times. Essential services such as health and education are collapsing under the weight of the bureaucracy imposed on them. If Gordon Brown takes over, he will be just in time to reap the whirlwind he sowed with his dogma and profligacy.

The BBC ran a programme on the way that global warming has been oversold. Perhaps that was a bit of a breakthrough, though the BBC boasted that not one participant was a climate change sceptic. Still it is something that they actually acknowledged that such an offensive creature might exist. Basically it was an attempt to use the soft sell, rather than the usual hyperbolic bludgeon.

There is a significant anniversary this month, the tenth birthday of Junk Science. This is a notable achievement by Steve Milloy and, latterly, Barry Hearn. Its comprehensive coverage allows us less diligent commentators to pick and choose. One day it will either be a valuable archive of a period when the world went mad, or it will have been censored out of existence. There is little doubt that the situation it was born to address has become significantly worse.

Also the Tim Worstal blog has its second birthday. In a short time it has become surprisingly influential; even to the extent of having its own leftie monitoring site, as we observed last month. It is a pity that Tim seems to have joined the trend of peppering his observations with Anglo-Saxon epithets of a fecundatory or excremental nature. When your bending author finished his apprenticeship it was with a sigh of relief at no longer having to endure conversations in which the only adverb, adjective or adverb of degree was the F-word. Now you can hardly avoid it in Hollywood films or television programmes. Such language is for people who are not blessed with an adequate vocabulary to express their thoughts, such as dockers or Labour cabinet ministers. Creatures of the New Establishment adopt it as a sort of puerile bravado and identification with the labouring classes. Leave it to socialist intellectuals to ape their inarticulate brothers.

This time six years ago, what turned out to be the draft of the first Number of the Month was circulated among a few friends and colleagues and as a result the Number Watch web site was launched three months later. Thereafter, it just growed, like Topsy. Now there is pressure from correspondents to turn it into a blog-standard web site. Your bending author was even accused of being a blogger, which added to the deficiency of élan that fostered this diatribe.

The blog standard did not exist when Number Watch started. At that time there were many browsers that did not support frames, so they were eschewed. It is arranged to the tastes of an old fogey, who still thinks that January comes before February and that the first comes before the second. Of course the FILO principle (First In Last Out) is familiar to one who was in at the beginning of computing ( and modelling). In those days, simply to execute a subroutine jump you had to create FILO or stack in machine code (sequence of numbers). When you have had to debug one of those you never forget it. There must be other old fogeys who read a standard blog and are irritated to discover that they have read the follow up before the initial comment. It is like hearing the punch line before the set up. It might appeal to the sort of people who buy a thriller and turn to the last page to find out whodunit, but not to those who grew up in the tradition of the English (or French) essay. By the way, you do not have to wear your mouse out to find the latest entry; simply press “control + end”.

Five years ago Number Watch reported that groups of Englishmen were covertly celebrating their saint’s day. This movement has grown year by year, so that now the flag of Saint George flies proudly all over the benighted country. Despite the efforts of the EU and Old Two-Jags to break it up, the old country, diluted but defiant, is beginning to show a little of its historic vigour. In the mean time sports fans have discovered that England has its own flag. This year it flew on Castle Hill overlooking the town, outside the George Hotel and as bunting in all the bars.

Anyway, spring finally arrived on the prepenultimate day of the month. It produced one rare wonder. In the absence of competing foliage, the blackthorn put on a spectacular display of blossom all over the Blackmore Vale. Great swathes of white lit up the hedgerows. According to the yokels, this presages the "blackthorn winter".

It is over five years since your bending author wrote for Sp!ked on the subject of the power line scare. Just when you thought everyone had forgotten it, up it comes again.  The trouble is that it is from the sort of committee that attracts scaremongers as a midden attracts flies. True to Orwellian tradition, it calls itself SAGE. The leak, it claims, is unofficial and premature. Students of modern bureaucratic jargon will find much to appreciate in its web site.

This has all the characteristics of a modern epidemiological scare – no plausible mechanism, an unacceptably low relative risk (1.69), the precautionary principle and victims. The latter are the thousands of people owning houses near power lines, who have lost a substantial part of their life savings for no good reason at all.

It’s a mad world, my masters.