The good news is that the bad news is wrong 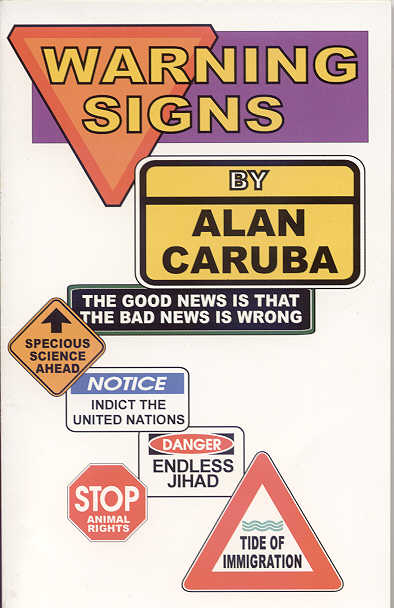 The above is the motto that graces the heading of Alan Caruba’s web site. The National Anxiety Center has been one of the prime links in the Number Watch collection ever since the birth of this site three years ago. At that time he was weighing into the environmental movement, exposing it as a totalitarian faction based on a mockery of real science. With all the power of his considerable verbal skills he demolished the shibboleths of the trendy left. Green cant, specious conservation projects, empty health and pollution scares, alternative energy myths, the deadening precautionary principle and many other totems of the new society came under his withering examination. Soon, however, other themes began to develop, that seemed to turn his motto on its head. The scarcely concealed corruption of the UN, the dangers of uncontrolled immigration and, above all, the emergence of militant Islam were among the things that he put forward as reasons for genuine anxiety. A year before the September 11th attack, he was writing about The Middle East, where trouble lives and is exported. He was, of course, ignored by the Establishment.

Many of the developments in the USA that Caruba laments have been rapidly and enthusiastically taken up by Britain and Europe. The replacement of a sound education system by one that was based on a mindless treadmill of irrelevant tests and plummeting academic standards is only one of the more egregious imports. Others are the nonsensical energy policy that blacked out California, the decline of liberty and democratic government and state backed extortion.

This collection of his essays will be read and enjoyed by anyone with an inclination to distrust the propaganda that is fed to us by the Great and the Good.

Long may his pen flow.