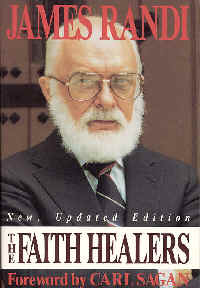 A remarkable book by a remarkable man, this grips like the good detective story that it is. Can there be anyone more mean and contemptible than those who enrich themselves by exploiting the sick, the poor and the gullible?  Randi and his team pursued these evil men over many years. Their very names reek with corruption - Popoff, Grant, Pat Robertson, Oral Roberts etc. The magnitude of the sums they wrested from their hapless victims beggars belief.

The Randi team, using subterfuge and disguise, penetrated the very lairs of these predators, exposing the vastness of their financial empires and the cynicism towards their victims. Some of the stories of their individual prey are truly heart- rending. Yet there is much entertainment in the story of the pursuit, which is told with refreshing wit and vigour. Nevertheless, the whole  thing is summed up by the touching dedication of the book:

There was a small boy on crutches. I do not know his name, and I suspect I never will. But I will never forget his face, his smile, his sorrow. He is one of the millions robbed of hope and dignity by charlatans discussed in this book. Wherever and whoever he is, I apologize to him for not having been able to protect him from such an experience. I humbly dedicate this book to him and to the many others who have suffered because the rest of us began caring too late.

Society owes a great debt to men like Randi, who are prepared to sacrifice their time and energy in rooting out the evil among us.