THE RISE AND FALL OF MODERN MEDICINE by James Le Fanu 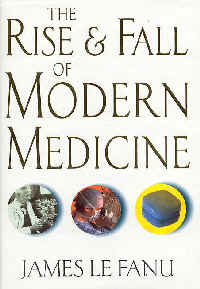 This is one of the most important books of the turn of the century.

Dr Le Fanu has long been one of the finest of medical journalists, covering a wide range of subjects and carefully avoiding the pitfalls of junk science. In this tour de force he demonstrates how medicine has suffered from that disease of modern society, the retreat from rationality that marked the latter part of the twentieth century. In the first part of the book he records the rise of scientific medicine, delineated by twelve definitive moments, the great discoveries that did so much to extend and enhance human life.

The second part of the book shows how, despite all these triumphs, society began to move away from the scientific approach. One of the major factors was the launch of the Social Theory and the author quite clearly demonstrates the fraudulent grounds on which it was based; its creator simply ignoring facts that were inconvenient. It was seized upon by both sides of the political spectrum. The right loved it because it promised to be cheap and the left went for anything with social in the title. Another important factor was the new genetics. Of course, the new epidemiology, with its casual abuse of marginal statistics, also played a major rôle.

The contribution of Sir Richard Doll, once freed from the statistical rigour imposed by his mentor, Sir Austin Bradford Hill, was also critical. His outrageously unscientific and wholly mischievous book The Causes of Cancer, uses the same technique as the proposer of the Social Theory, simply ignoring inconvenient facts. In particular he quite openly chooses to ignore the most important factor – ageing. Thus black Americans are considered to be more prone to cancer than Nigerians because of their diet, whereas in fact the life expectancy of the latter is so low that they do not live long enough to contract it. All the nonsense about red meat, high fat and environmental factors owes its origins to this source.

Le Fanu has produced a most scholarly work, full of references, yet one that is eminently readable. How it contrasts with Doll's sleight of hand with vast tables of statistics and phoney calculations! If Doll had submitted such a report as an engineering student, he would have had it thrown back at him – "What do you mean by taking a single figure, like 2 and multiplying it by a weighting factor of 0.084416?" Students of silly numbers may wish to consider table A2 in The Causes of Cancer as one of the finest exemplars of numerical sleight of hand. A mass of numbers, many of great apparent precision, it purports to produce age-standardised death rates from lung cancer to a precision of four significant figures; but the change from the raw data is a mere 9%, much less than the likely errors in the original data. It is the stock-in-trade of the illusionist to distract the observer with complicated patter and by-play, while the actual trickery (in this case ignoring the age factor) goes unobserved.

In a rational world Le Fanu's book would have caused a furore, faultlessly exposing as it does the fallacious nature of some of the main tenets of the current orthodoxy, but as with inconvenient facts the new establishment simply ignored it.