PC,M.D. How political correctness is corrupting medicine by Sally Satel 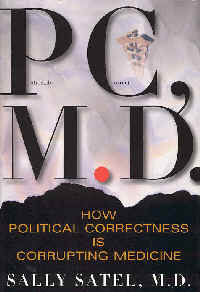 IN THE SUMMER OF 1998 a group of nurses gathered at a university in New England for a graduate-level class. Just as the class was ending, a groundskeeper who had been working in the heat outdoors walked in and told the nurses he was feeling faint. Earlier in the week, he explained, he had suffered a hard blow to the head. Full of sympathy and concern, the nurses jumped into action.

Here is what these trained professionals did. Numerous pairs of hands began waving a few inches from the groundskeeper's body as the nurses assessed his "human energy field." One student told him that what he really needed was "a good cry." Finally, one nurse thought to put together the man's symptoms with his recent head trauma and suspected, correctly, that a blood clot was forming around his brain. The man required emergency medical attention to relieve the life-threatening condition.

The quick-thinking student who rushed the groundskeeper off to the hospital was merely acting as any trained nurse would. The heart- stopping question is: What on earth were his classmates, all fellow nurses, doing!

The answer is "therapeutic touch:' or TT. Developed in the 1970s by Dolores Krieger (no relation to Nancy Krieger), a professor of nursing at New York University, and her mentor Dora Kunz……..

The above is just one of the many horror stories in this ominous book. In other reviews in these columns we have held up our hands in dismay at the braying of the asses, but it has all been a bit of a joke. The joke turns sour, though, when people start dying or having their lives ruined. All the old catch-words are here; post-modernism, feminism, hermeneutics etc., but now in a more sinister guise. It is rather a scholarly work, full of references and footnotes, but the story it tells is quite extraordinary, particularly in its account of how millions of American tax dollars are steered into fatuous trendy campaigns that do nothing but harm to their victims. The truly amazing thing is that it is all still going on, despite simple demonstrations that "therapeutic touch" and all the other nostrums of the medical new left do not work. Let us be thankful that there is at least one brave woman who has the courage to tell it how it is.