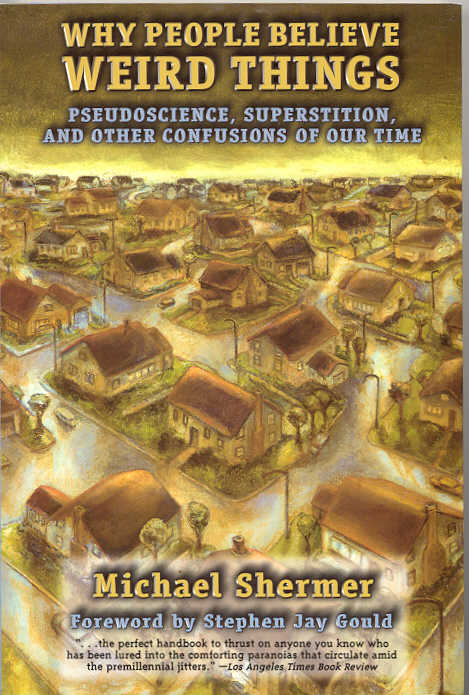 It starts off a bit slow; full of eyelid-dropping words like epistemology, ontology and paradigm. By chapter 3, however, it gets moving with a comprehensive survey of the mechanisms of false beliefs. After that it really gets into its stride, analysing all the major fatuities of the day; including ESP, alien abduction, witch-hunts, cults, creationism and holocaust denial.

One of the things that makes this a fascinating read is that the author has been personally involved in the quest to unmask the villains and enlighten the bemused, rather in the manner of the great James Randi.

Michael Shermer is the publisher of Skeptic Magazine, the director of the Skeptics Society and the host of the Skeptics Lecture Series at the California Institute of Technology. He is the author of Denying History and teaches the history of science, technology, and evolutionary thought in the Cultural Studies Program at Occidental College in Los Angeles. Like many of the debunkers reviewed in these columns he is a disciple of that founding father of modern scientific scepticism, Carl Sagan, to whom we all owe so much.

The coverage of holocaust denial is particularly personal and poignant. It reminds me of a much more trivial incident in my own life. I was listening to a social historian talking on TV about the Dennis Healey era in the UK, when taxes were at a draconian level. He stated that there is no evidence that people refused promotion or small business deliberately threw their money away. I was there, dammit! I remember sitting round a swimming pool with business men who were exchanging tips on wasting money in order not to make a profit. I knew people who refused promotion. I saw the most honest society on earth become corrupted. Even the vicar would ask tradesmen what the cash price was of any service. A black economy grew up almost over night. So it was with the holocaust. Not only have people of my generation seen the films and photographs, we have spoken to individuals who were there. It certainly makes you wonder about the accuracy of accounts of events that happened 2000 years ago.

This is an essential addition to the library of  anyone who values truth above superstition.