VOODOO SCIENCE: the road from foolishness to fraud 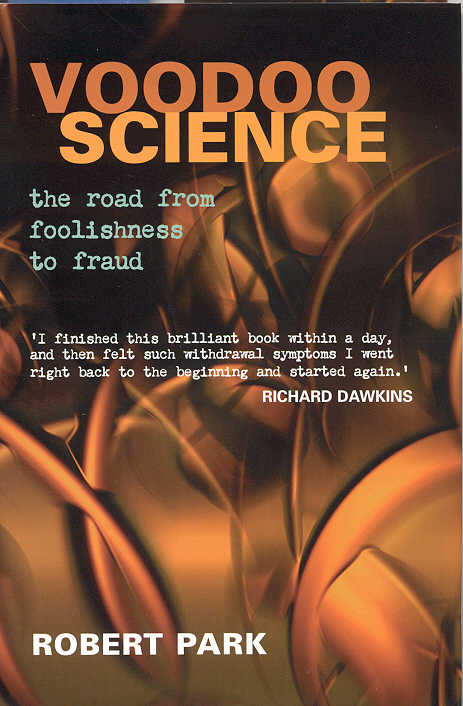 Cards on the table, here is a paragraph from Sorry, Wrong Number!

The level of abuse hurled at renowned scholars by non-entities sometimes has to be seen to be believed. Frederick Sietz, a distinguished physicist, President Emeritus, Rockefeller University, and former president of the National Academy of Sciences, dared to side with the doubters on global warming. He was harangued in the columns of The New York Times (May 2, 1998) by one Robert L Park, a Professor of Physics at the University of Maryland, and gratuitously accused of being in the pay of the petroleum industry. Park reveals his credentials by stating that “Most climatologists agree that as a result of increased burning of fossil fuels, the temperature of the earth has gone up perhaps 0.7 degrees Fahrenheit……….many of the world's great cities, may be flooded in the next century by rising sea levels as the polar caps melt. Drastic changes in rainfall patterns could wreak havoc on food production.” In fact, even some of the most committed adherents of the Global Warming scam agree nothing of the sort. The attack on Seitz is a continuation of one in Environmental Health Perspectives Volume 106, Number 4, April 1998, in which his stand is likened to “the denials offered by the tobacco industry which were disingenuous and resulted in untold human misery”. Untold? Hardly! As we shall see later.

The only explanation is that there are two Professor Parks in the Physics Department at Maryland; for this is an extremely good and interesting book. It traces the history of junk science in America and shows the inexorable process by which a little foolishness develops into a gigantic fraud. It is full of reason and good science – even on global warming it admits that the issue is in dispute. Professor Park has been personally involved in many of the cases covered (always on the side of the angels) and the insight he brings adds a great deal of interest. He rounds up the usual suspects (wonder cures, free energy machines, cold fusion, power lines etc.) Naturally, the major villains are involved (the popular media, lawyers and politicians) but the personal knowledge of the real people makes for a fascinating narrative. Anyone interested in the relationship of science to society (or anyone who simply likes a good read) should get this book.