THE DEMON-HAUNTED WORLD Science as a candle in the dark 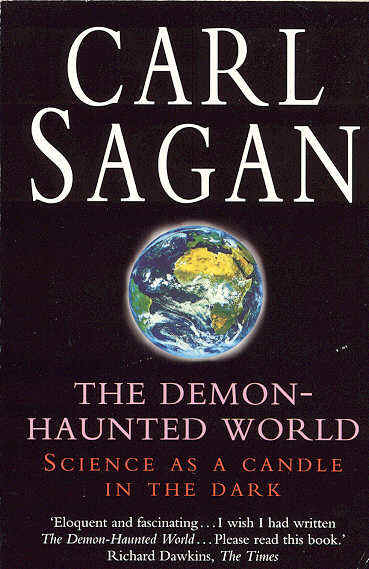 If you only feel able to read one of the books reviewed here, please make it this one. Carl Sagan writes with the authority of one of the leading scientists of the age, but he also writes with great wit and style, making this book a joy to read as well as a revelation. He closely examines the myths and practices of the post-rational society exposing them for the dross that they are. The anecdotes are extraordinary, entertaining and pointed. Just consider one subject, Ronald Reagan.

Ronald and Nancy Reagan emerged from the credulous culture of that State of Insanity, California. They relied on an astrologer to make decisions on both public and private matters. Reagan, who spent the war in Hollywood, vividly described his role in liberating Nazi concentration camp victims. He was, in fact recalling a film in which he acted – A wing and a prayer. Is it any wonder that he was so easily sold the mythology of the Strategic Defense Initiative (Star Wars)?

A particularly useful chapter is The Fine Art of Baloney Detection, which lays down the rules for clear sceptical thinking, including a review of the major logical fallacies. Using such methods he succinctly debunks a whole range of modern myths, such as alien abduction, recovered memory, mediums, faith healing etc.

The question is – was he wasting his time? As readers of Number Watch will perceive, if anything the amount of unscientific junk in the media is increasing. Sagan’s achievement, however, was to give impetus to the development of the resistance movement, as exemplified by the good guys list in our links, not only in this book, but also in some thirty others and in various speeches and other contributions. His polymathic wisdom contrasts so much with the blinkered attitudes of his opponents that he defeats them by example.

This book is an essential addition to the library of anyone with a claim to rational thought.