Earth in the balance (re-issue with new forward) 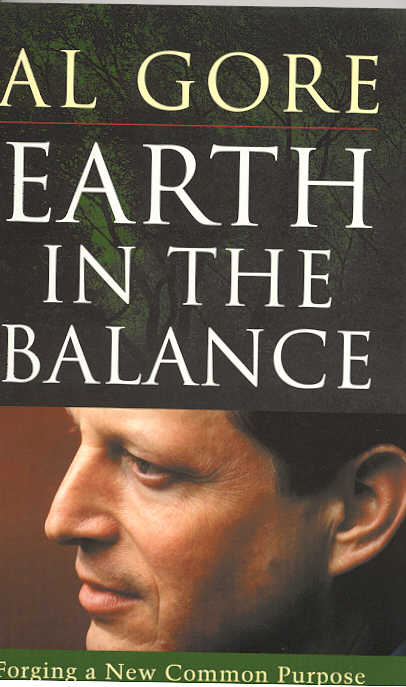 As the original book has been extensively reviewed (and debunked) it is only necessary to review the new Forward: The Coming “Environment Decade”, even though it is the same old mixture of truisms, fallacies and non sequiturs. The author has made it easy for us by including this final paragraph:

For those who wish to attack my view, let me save you the trouble of reading the entire book. On page 325 and 326, I wrote “It ought to be possible to establish a global program to accomplish the strategic goal of completely eliminating the internal combustion engine over, say, a twenty-five year period.” It is possible; it needs to be done; it will create more jobs, not destroy jobs. I am proud that I wrote those words in 1992, and I reaffirm them today.

This view was attacked on September 21st, in these words – "People should be able to get in their cars and drive where they want, when they want, at a low price." Who mounted the attack? None other than the same Al Gore. The exigencies of an approaching election had produced the most amazing u-turn in political history, see September.

It would be futile to go through all the fallacies in this book, so let us just deal with one new figure in the new forward. This show a reconstruction of the relationship between CO2 concentrations and temperature over the last 500,00 years. The scales have been adjusted so that one almost exactly matches the other. This is totally unsurprising – you can perform a simple experiment in your own kitchen to show that CO2 concentrations must follow temperature. This author, however, turns science on its head to establish the “truth” of Global Warming, a crude exploitation of the correlation fallacy. Even more crudely, the warming of the earth is claimed to account for disasters such as the recent floods in the Mississippi and Bangladesh.

It is a fact that the earth is warming up, and has been doing so since the little ice age, half a millennium ago, probably because of changes in solar activity. Much of this book is occupied in establishing this truism. Another truism is that it is stupid to pollute the air and the sea, but we don’t need phony calculations to establish the fact. 1998 is ominously proclaimed as the warmest year on record. If the earth is warming up, then every new year is likely to be the warmest year on record.

Apart from the truisms there are the downright lies:

In the teeth of the storms there are still some scientists – a shrinking but vocal minority, invariably invoked by special interests – who deny or doubt climate change or its relationship to carbon dioxide pollution.

Apart from being an egregious example of the ad hominem fallacy, this statement is demonstrably false. In Sorry, wrong number! I wrote that the 500 original signatories to a letter opposing the climate change treaty had risen to 15,000, 10,000 of whom had higher degrees. By the time the book was published the total had risen to 19,000: whereas a letter in favour of the scam, issued by the Union of Concerned Scientists, raised a miserable 1,599 signatures, many of whom really did have special interests. There are many more scientists, such as this reviewer, who have not got round to signing.

The most dangerous aspect of this book is that it is well written and persuasive. Anyone not trained to spot fallacious arguments will be completely taken in by it.