The hidden role of chance in life and in the markets 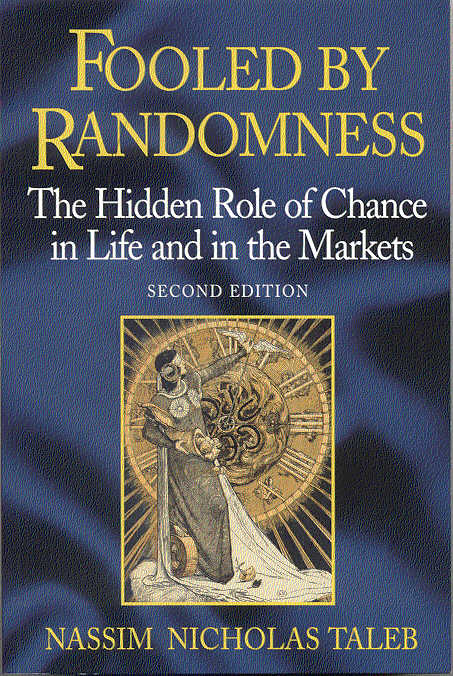 When you see a replay of the game from a different camera angle, you gain a greater appreciation of what transpired, while some of the action is seen in a whole new light. Anyone who has read the two books associated with this web site will be familiar with most of the concepts covered by Taleb. They include such things as the extreme value fallacy, cause and effect, mortality, non-stationarity, birthdays, clusters  and much else. Here, though, the scene is recorded from the point of view of a trader in the money markets. All the familiar fallacies and illogicalities are there, but the results are not so much health scares or political mistakes as gains and (inevitably) losses of billions of dollars.

In fact, as a parade ground for all the folly and hubris to which “intelligent” man is liable you cold not pick a better arena than the markets. It adds considerably to the entertainment that the author is widely read and has absorbed the wisdom of past ages. He rightly takes his cue from the likes of Hume and Popper, rejecting some of the later revisionist ideas and largely despising the contribution of the profession of journalism. Sometimes the account gets a little too wordy and anecdotal for the clarity of the message, particularly early on, but it never falls short of holding the attention of the reader.

The text is occasionally marred by lapses into political correctness. In particular, it fails the tobacco test, stating "For few cigarette smokers remain unaware of the fact that lung cancer strikes one in three of their population." This is a gratuitous exaggeration by at least a factor of five.

The numerical examples are, simplistic, as of necessity they are directed at a readership of doubtful numeracy. Much is made of using the “Monte Carlo” method, rather an old-fashioned term from the days of the Manhattan Project for simulation with pseudo-random numbers, and occasionally this is stretched a bit too far. In a simulation demonstrating the time dependence of making a profit under a prescribed distribution, for example, the time interval goes from a year down to a second. It is rather doubtful that such information would arrive with a bandwidth of about 1 Hz or a sampling frequency of 2 Hz. Such quibbles are, however, only for the cognoscenti and do not detract form the evangelical mission of the book, and even those already in the know will derive great enjoyment from this highly recommended read.