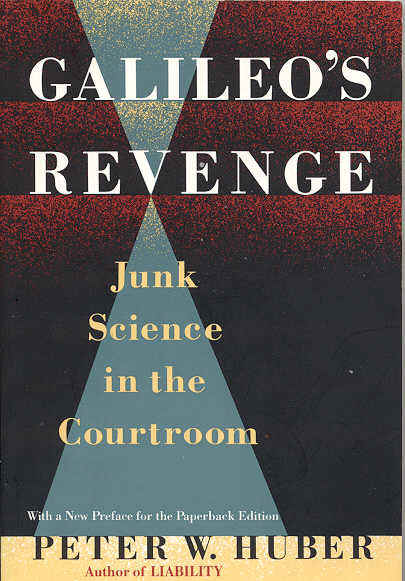 If it were a work of fiction it would be unbelievable. There is a huge cast of characters – ruthless lawyers of course, professional expert witnesses with a total disregard for the elements of the scientific method, genuine victims of the tragic consequences of chance and people who do something stupid and then look round for someone else to compensate them for it. In the Lewis Carroll world of the American Courtroom anything is possible and acceptable. If you leave aside the fact that this phenomenon is frightening and destructive, you can get a great deal of entertainment from Huber’s treatment. He has a neat line in analogies, my favourite being the Cargo Cult, which was described by Richard Feynman the Great.

Inhabitants of New Guinea have built a magnificent airstrip with bonfires continually burning as beacons. In Feynman’s words:

During the war, they saw airplanes land with lots of good materials, and they want the same thing to happen now. So they've arranged to make things like runways, to put fires along the sides of the runways, to make a wooden hut for a man to sit in, with two wooden pieces on his head like headphones and bars of bamboo sticking out like antennas - he's the controller - and they wait for the airplanes to land. They're doing everything right. The form is perfect. It looks exactly the way it looked before. But it doesn't work. No airplanes land.

The Cargo Cult as an analogue of modern “liability science” is compelling. “They are both impelled by zealotry and profit, not by science. Both aspire to control wisely and effectively, but neither do………..Bring down the cargo, the rest is detail.”

Accepting that the legal profession is corrupt and careless of the truth, it is still hard to accept the sheer amount of malpractice by medics, scientists and engineers at the witness stand. Where are their own regulatory bodies? There is something rotten in the state of the Union, and it is spreading around the world.