And now, the good news!

The Many Benefits of Atmospheric CO2 Enrichment
By Craig D. Idso & Sherwood B. Idso
Published by Vales Lake Publishing
Copyright © 2011 by the Science and Public Policy Institute and the Center for the Study of Carbon Dioxide and Global Change
ISBN 978-0-9819694-2-8
Library of Congress Control number:  2010941431 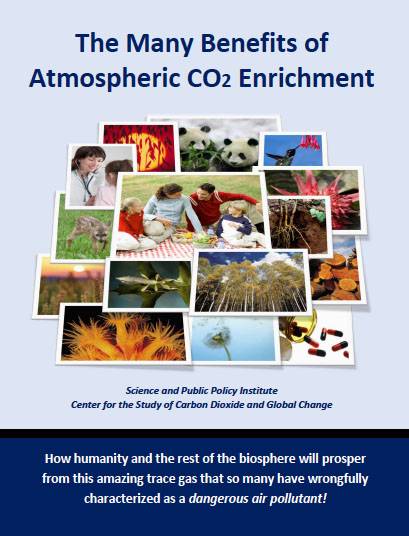 First, a declaration of prior interest: your reviewer once wrote an essay in praise of carbon and is therefore unlikely to be neutral in the case of a book with such a title. Of course, a promising title can often herald a treatment that has all the clarity and meaning of a mission statement. Fear not: this is a work that is scholarly, with copious references to genuine scientific research, yet manages to be accessible to the lay reader through judicious use of summaries and sidebars. It is a curious manifestation of the politics and religion of modern times that a rare atmospheric gas, which to be called benign would be an understatement, has been perversely cast in the role of original sin in the new system of belief.  Here the manifold benefits of the gas are helpfully arranged in alphabetical order.

The results of a large number of scientific experiments are arrayed to demonstrate how an increase in carbon dioxide concentration enhances the metabolism of plants and therefore the animals (including humanity) that are dependent on them. Not only is growth improved, but plants are more resistant to disease and stresses (pollution, light, salinity, temperature, radiation and water). Furthermore, beneficial substances such as vitamins and other bioactive compounds also increase with carbon dioxide exposure. A caveat here: some of the claims are from the realm of modern epidemiology, with its wayward treatment of statistical significance, and accounts of, for example, cancer prevention by consuming particular vegetables need to be regarded with some reserve.

It is clear that we are a fortunate generation. Given that it is demonstrated that carbon dioxide concentration is a follower of temperature, the warming after the little ice age has awarded us all the prosperity that has previously accompanied warm periods (in Roman and Mediaeval times). That this has occurred at a time when there is also a perverse establishment in much of the world and a media for whom “good news is no news” provides just another demonstration of human perversity.