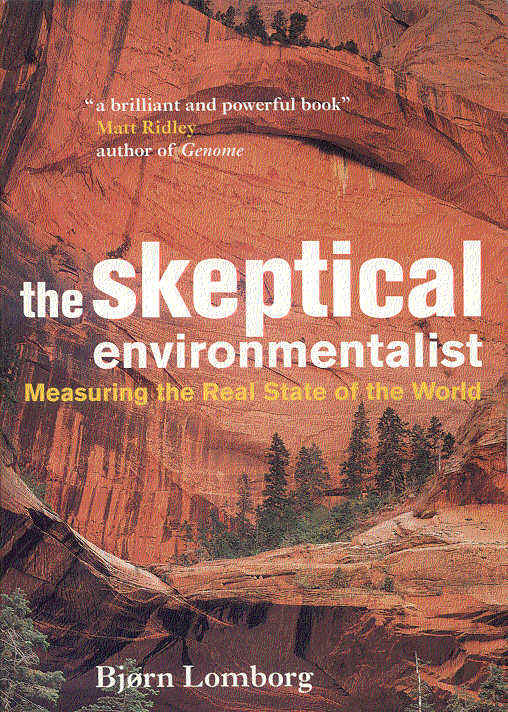 Make no bones about it this is the Gospel (Old English for good story). No wonder it caused mayhem among the environmental doomsayers; for doom means dollars, and lots of them. From the archetypal Rachel Carson to the megarich Paul Ehrlich, people have been turning gloom into gold, and there is nothing that produces more righteous indignation than a threat to one’s income. Lomborg’s case that the environment is getting better is well made and it can be left to interested parties to dispute it. What is more interesting is his claim to be a sceptic (i.e. one who is inclined to disbelieve).

From the sceptical point of view there are some curious anomalies in the tome. Perhaps there is a clue in some of the language used. For example, on page 24 he states “If a person gets less that 20% above the physical minimum, she is counted as undernourished or starving.” This is now a common modern mannerism that would only be noticed by someone educated in the distant past, when English grammar was still taught in schools. You know, the sort of dinosaurs who differentiate between “due to” and “owing to” or who try to strenuously never split an infinitive. They learned that in English syntax man embraces woman. The fact is that Lomborg is politically correct, so you can bet that the bêtes noires of PC are in for a pasting.

Most sceptics disbelieve that a particular person was born on December 25th of the year dot, but they do not hence feel inclined to abandon the nomenclature of AD and BC, which is embedded in our scientific and literary heritage, just for the sake of political correctness and at the expense of an absurd discontinuity. Lomborg does. His illustration of the fallacy of the single sample is “My granddad smoked all his life and was healthy until he died at the age of 94, so smoking isn’t dangerous”, thereby committing the fallacy of the loaded example. Throughout the book the figure of 30% of deaths being caused by smoking is reiterated. Coming originally from the CDC, this claim has been subsequently exposed as a fabrication based on the assumption that virtually all smokers die of their habit. Look for example at figure 125:

What are we to make of a figure such as this? The first thing anyone with any experience of applying statistics to measurement would note is the extraordinary precision claimed. To identify the attribution of causes of death to an accuracy of 1% would indeed be a remarkable achievement. The second thing that would occur to anyone familiar with doings of epidemiologists is the fact that there is no room for any spontaneous tumours. Yet we know from the very existence of the epidemiologists’ favourite pets, rodents specially bred to be tumour prone, that a large percentage of them will develop tumours whatever treatment they receive.

The ultimate condemnation, however, would be from anyone who read the original source with a sceptical eye. This was The causes of cancer by Doll and Peto. Sir Richard Doll had made his name by jointly identifying tobacco as a major risk factor for lung cancer. With the passing of the restraining influence of his mentor, Sir Bradford Hill, however, he became something of a scientific loose canon. The book is a farrago of nonsense, mainly because of a preposterous assumption at its outset. These authors chose to dismiss what is, by a long, long way, the most important risk factor in cancer; namely ageing. See the definitive (and therefore neglected) book by James Le Fanu for a comprehensive demolition.

We could perhaps forgive one lapse, but figure 127 from a different source is even more bizarre, giving us the relative cancer risks associated with the likes of coffee, celery and toast, all to a remarkable precision. Here the PC message is in the caption: alcohol presents a cancer risk 36 (not 35 or 37) times greater than coffee. Admittedly there are various caveats in the small print, but the overall effect is to lend credence to a swathe of propositions that are clearly absurd. It is therefore in the collateral damage that this otherwise valuable text founders, particularly in propping up the global warming myth.

As early as page 4 we read “Global warming……which is almost certainly taking place……..” The damaging nature of this statement, advanced with no evidence or attribution, can be gauged from the eagerness with which it was taken up by the faithful – “even the Skeptical Environmentalist accepts the truth of global warming.” Any sceptic worth his salt, having looked at all the evidence, would come to the conclusion that global warming is almost certainly not taking place. The subsequent valid suggestion, that the proposed cure is far worse than the putative disease, rather loses its impact.

It is mentioned in passing that 3,000 Americans die from passive smoking each year and the reference is given to the EPA metastudy. Even if the author was unaware of the fraudulent background to this particular publication, what is a teacher of statistics doing quoting a result based on a one in ten level of significance and a relative risk of less than 1.2?

Throughout the text there are many other examples of anomalous credulity: since pesticides cause cancer we have a problem; (nitrates) touted – somewhat incredibly – as a problem on a par with global warming; it is believed that changing our diet so as to avoid fat, meat and obesity and focusing on fruit, green vegetables and fiber would get rid of all or almost all food related occurrences of cancer; it is estimated that around 380,000 asthma cases in the US are caused by parental smoking; and on and on.

The plain fact is that Lomborg is not a sceptic at all. He believes almost everything he reads, even in journals of epidemiology. It’s just that the he has a sunnier disposition than all the other environmentalists. He has also managed to turn it into a nice little earner, which presumably makes his disposition even sunnier.

To take a word from the Randi Encyclopaedia, the Skeptical Environmentalist is, in fact, something of a credophillic.