THE NEW ELITES: Making a career in the masses by George Walden, Allen Lane, London. 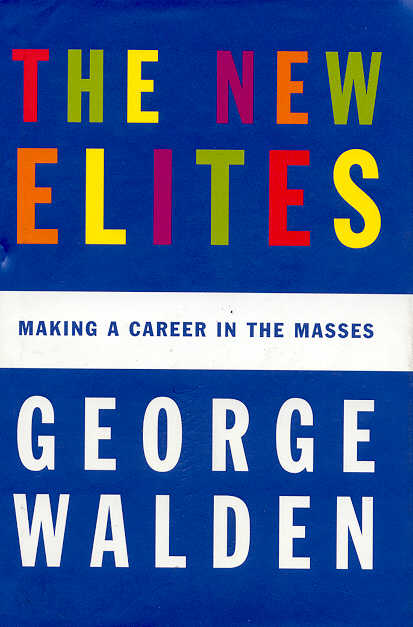 There are no wrong numbers in this book, but there is a guide to the development of the political climate in which they thrive. It is a well-written, scholarly account of the rise of the new elites, who can all be identified by their assumption of an anti-elite posture. It is all exemplified by the British Prime Minister, disguising his privileged background behind a permanent rictal grin, banal cultural tastes and a phoney estuary dialect.

In the weird world of modern politics and media, the new elite patronise the masses with false flattery as they exploit them. In Walden’s words, this new populist oligarchy practices the fine English art of condescension to create a culture of pretence by which pop politics and pop media hold the masses in their thrall to the benefit of the privileged few. T’was ever thus, but the unique feature of our age is the universal adoption of a common camouflage by those at the top. Thus the masses are kept in their place, not as before by poverty or impotence, but by being kept contented and complacent on a diet of continuous intellectual pap.

The looking-glass form of patronisation is summarised by a quotation from prominent New Labour crony, Gerry Robinson:

Too often in the past, the arts have taken a patronizing attitude to audiences. Too often in the past artists and performers have continued to ply their trade to the same white, middle class audience. In the back of their minds lurks the vague hope that one day enlightenment may descend semi-miraculously upon the rest, that the masses might get wise to their brilliance…….

Such reasoning justifies the general dumbing down of the culture (which in itself is considered a naughty word) and the thriving of junk education, junk media and junk art. A consequence less explored by this author is the tolerance and encouragement of junk science, which is what this web-site is all about, but presumably the author sticks to his own areas of expertise.

The fatuous and symbolic pinnacle of all this is the Millennium Dome – “Priggish, hollow, self aggrandizing, vapidly jokey, mincingly patriotic, cynically populist, massively patronizing, mediocre to its soul and curiously provincial – the great White Wen of Greenwich is a monument to the new elites erected by themselves.”

This is an entertaining read in its own right, but also a finely observed commentary on current mores that is worth a place on the bookshelf.