The True Story of DDT, PCB and DIOXIN 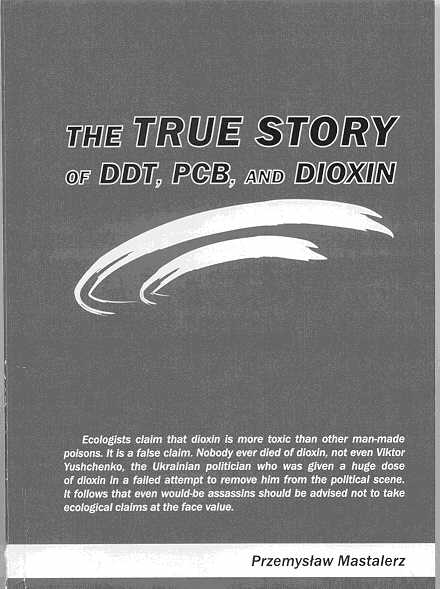 This is a masterwork! It is one of those increasingly rare phenomena, a true work of scholarship that looks at all the evidence and not the edited highlights acceptable to the establishment. There are over 550 references, which are all dealt with, not just listed.

The starting point is the Stockholm POP Convention of 2001, when in a travesty of science and common sense, the stultifying “precautionary principle” was evoked to cause 127 signatory nations to ban a family of highly beneficial chemicals. The rest of the book is largely a retrospective account of the evidence that the Convention should have looked at before coming to a conclusion.

The history of DDT, of course, goes way further back. Nothing could sum up the irrational and mendacious manoeuvrings of the environmental movement than the history of this substance. DDT was first synthetised 130 years ago, but it was in 1939 that its insecticidal properties were revealed, which was just in time to prevent the repeat of the ravages of insect borne disease that had occurred in the trenches of the First World War. It was remarkably non-toxic to mammals, but there were agricultural abuses, as there were to be later with antibiotics. The conversion of one of the greatest life-savers ever invented to the epitome of evil chemistry is one of history’s most remarkable examples of the triumph of baseless propaganda over rational thought. In this book, the whole sorry story is traced, and compelling evidence adduced against all the accusations levelled at DDT. The author performs the same service to dioxins and PCBs.

The villains of the piece emerge quite clearly. There is, of course, Paul Ehrlich, the man who made himself rich by always being wrong in his doom-laden forecasts. There is William Ruckelshaus, who ignored the scientific evidence and even the advice of this own experts to declare a ban that was tantamount to a death sentence to millions around the world. Incidentally, it is an interesting sidelight that neither of those names was queried by the Microsoft spell checker.

I am against DDT because eradication of malaria increases the overpopulation.

There are too many people and banning DDT is as good a way to get rid of them as any.

There is the faith in all its stark inhuman reality.

There are some surprises, even for one who is familiar with the arguments. Dioxins, for example, have been shown to have existed on Earth for at least four million years, which is not really surprising as they are natural products of combustion. Two well-known professors of chemistry illustrated the non-toxicity to humans of DDT by publicly swallowing substantial doses during their lectures.

The quotation that graces the front of the book reminds us of one of the most remarkable public demonstrations of the non-toxicity of dioxins. The would be assassins of Viktor Yuschenko, believing what they were told by the ecologists, administered a huge dose of dioxin, only to produce a severe attack of chloracne, which they would have expected if they had read the likes of Number Watch or Junkscience.com (or their associated books).

The many tables of data are highly revelatory in so many different ways. For example, it is shown that fashion largely dictates the results that “scientists” get for their tests.

This is a must-read for anyone interested in the battle between scientific truth and eco-theocratic falsehood.