The Tyranny of numbers:
why counting can't make us happy 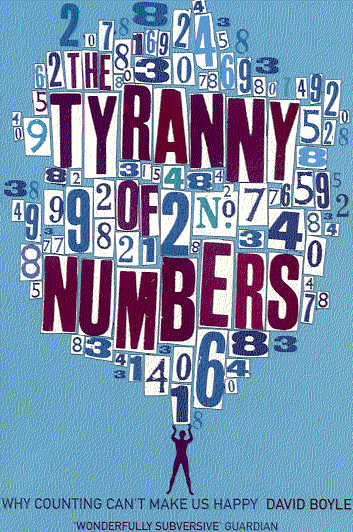 Boyle’s thesis is that there is too much measurement, too many numbers and, above all, too much measuring the unmeasurable. These last three words are the title of a chapter written by this reviewer, so he is unlikely to argue the point. The book offers a very entertaining read, with a long cast of characters (Jeremy Bentham, John Stuart Mill, Edwin Chadwick, Charles Booth, the Webs, John Maynard Keynes et al) who are exposed warts and all, with much emphasis on the warts. They provide an illustrated history of obsessive measurement that makes the account a useful prequel to other recent treatments of the subject.

The weakness of the book is that it is Hamlet without the prince; for there are virtually no numbers in it at all. This will, of course, add to its appeal for most readers and particularly the author’s fellow journalists, who are fond of proclaiming their own innumeracy. It makes one wonder whether the origins of the work lie in a fear of the numbers themselves and a desire to retreat into a vague, cosy mixture of environmentalism and the humanities.

The main fault in the book, however, occurs at the end where it has a dying fall. Particularly notable is the treatment of one of the most grotesque abuses of measurement in history, the myth of global warming, which is treated as though it were a real phenomenon. While rightly pointing out that the crucial moment was Margaret Thatcher’s sudden and astonishing about turn to embrace the cause, which was all the more startling because she was a politician of the right and boasted the rarity of a scientific qualification, the account is rather credulous. It is presented here as a sort of Damascene conversion under the tutelage of the Greenish Sir Crispin Tickell, ambassador to the UN, and Prince Charles. Nasty old cynics, however, might note that she had been conducting long-term vendettas against the coal miners and the oil sheiks, who had brought down the previous conservative government, and was as a consequence promoting nuclear power.

The weakness of a completely non-numerical treatment is all too evident in the coda. The author seems quite unaware of the statistical malpractices of the epidemiologists and ascribes all the nonsense to science itself, as is well illustrated in this paragraph:

We can see where it goes wrong all around us. The more politicians urge us to look at the scientific evidence, the more their numbers seem to contradict each other. Red meat has a statistically proven link to bowel cancer in the USA but not in the UK. Tea is statistically proven to be good for you and bad for you – the same with margarine, wine, Q-tips, jogging, breast implants and practically everything on the market. Our overmeasured world has become the victim of some social version of Heisenberg's Uncertainty Principle – that the observer in a scientific experiment affects the result.

Nevertheless, despite these quibbles, it is a thoroughly good read and recommended.